I was fortunate to attend this past weekend’s celebration of life for Dede Ginter, Ginter Associates. Dede was a legend in Orange County PR circles. One of the first women to join the Orange County Chapter of the Public Relations Society of America (PRSA), Dede went on to receive more than 25 PRSA excellence awards. In 1986, she was honored with the OC PRSA Distinguished Service Award.

You can read more about Dede’s many impressive accomplishments and interests in the obituary. But I will always remember Dede for her genuine kindness, sincerity and ethics.

I met Dede early in my career, through the Orange County Press Club. My late husband, John, who wrote for the Orange County Register, was president at the time. But like Dede, I was “on the PR side.” I learned so much from watching her. Dede believed strongly in the freedom of the press. I am pretty sure she saw her role as part of her civic duty to help reporters get the best story possible. And they knew she was a very reliable source.

Afterward, Dede would stay in touch. Whenever our paths crossed, she would ask how John was doing and what he was working on. She was genuinely interested in the answers. And when John published his first book, she proudly came to the book signing party at my parents’ home.

When I decided to start my own marketing communications business in 1990, Dede was one of my biggest supporters. She sent me referrals and even shared a sample contract with me. Whenever I had questions, I knew I could call her.

Around the same time, Dede started holding the “Hack ‘n Flack Tea” every August at her Fullerton home. She invited women journalists, publicists and writers. (For those who may not know, “hack” refers to journalists. I am, of course, a “flack.”) It was always such an interesting, stimulating afternoon as we discussed our work, interests and families. Dede was genuinely interested in all our lives and encouraged us in every way she could.

I felt honored to be included and looked forward to “Hack ‘n Flack” every summer. It was always held the Saturday closest to Aug. 18. That date was significant because the 19th Amendment, which gave women the right to vote, was ratified on that day in 1920. Dede always reminded us about that during the tea.

And last weekend, during the eulogy, I think I gained better insight as to why that date was so important to her. Dede was born in 1929—less than 10 years after women gained that right. As a young woman, her career options were severely limited. But Dede simply created her own path—straight from her dining room table.

Despite the many obstacles, Dede saw opportunities. She helped make sure the rest of us could see them, too.

For me, Dede’s memory will always be a blessing. 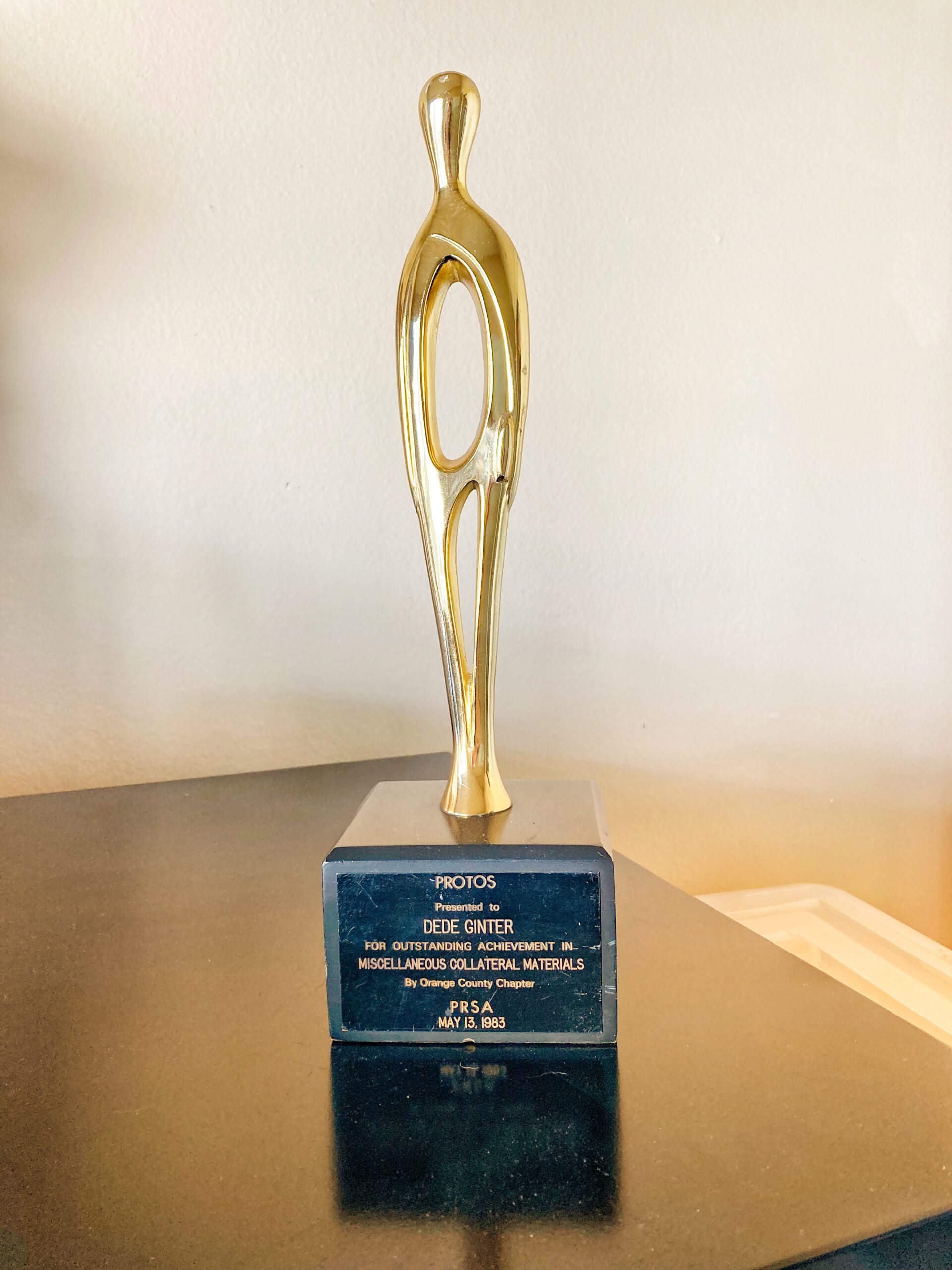 One of Dede Ginter's many Protos awards from OC PRSA.